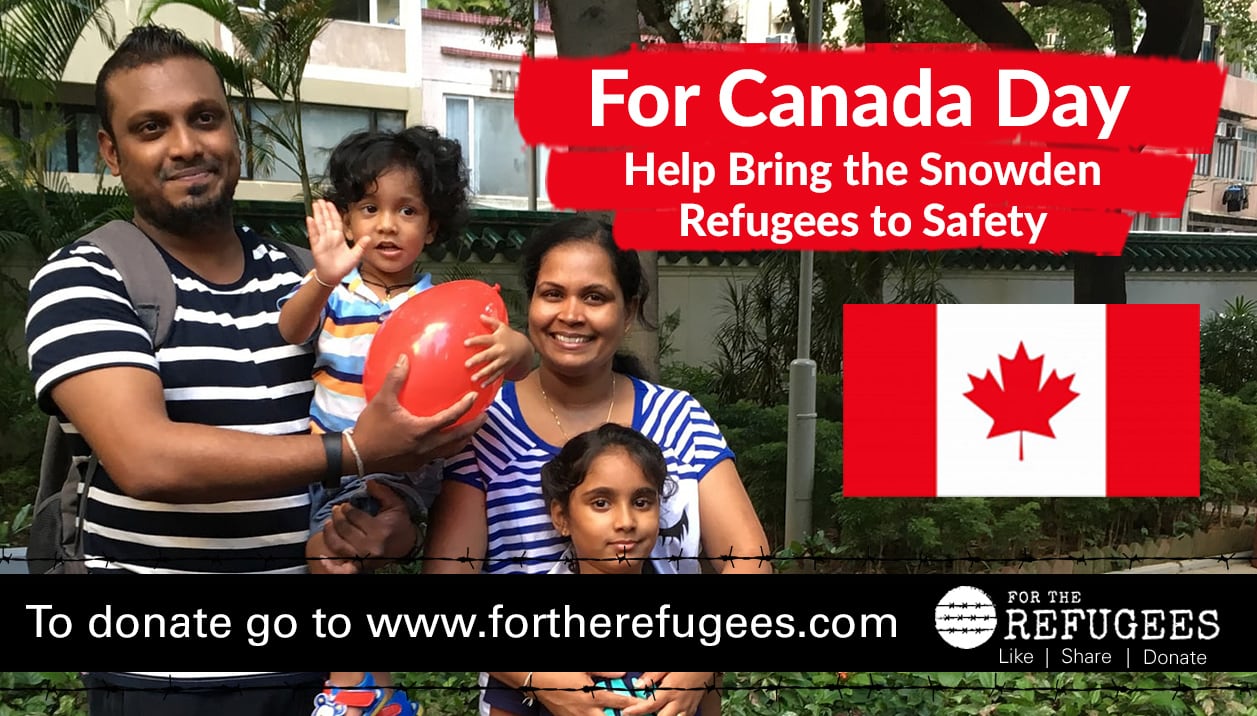 Today is Canada Day, when Canadians get together to celebrate our country. For Snowden refugee Vanessa, and her daughter Keana, it’s a bittersweet occasion.

They’ll be enjoying Canada Day in Montreal, where they are safe and being supported in their resettlement by our non-profit. But they’ll be missing Keana’s father, Supun, his wife Nadeeka, and Keana’s two half-siblings, Sethumdi and Dinath.

The remaining Snowden refugees are still stuck in Hong Kong, a lawless place where they have been persecuted by the authorities for their connection to Edward Snowden, and where they live in hiding from the Sri Lankan agents who witnesses say have been searching for them.

While they wait for their refugee applications to wind their way through Canada’s interminable system they remain cut off from the normal support payments that asylum seekers in Hong Kong receive, and entirely dependent on your donations to stay alive.

These refugees have made the front page of most major newspapers in the world, in some cases several times, but as the news cycle moves on, donations dry up.

And that’s a big problem.

Thanks to the support of Edward Snowden, and other friends like Oliver Stone, Shailene Woodley, Joseph Gordon-Levitt, Laura Poitras, Daniel Ellsberg, and so many of you we’ve been able to raise over $200,000 to support these refugees since 2017.

But we spend close to $10,000 a month to pay the living expenses of the five Snowden refugees still trapped in the second most expensive city on earth, and the two who are now safe in Montreal.

Lately, donations have dried up, and that means we’re only a month or two away from running out of money. If we do, the consequences are unimaginable.

There is no safety net. Your donations are the only thing standing between these brave refugees, who are legally barred from working, and a life of destitution on the unforgiving streets of Hong Kong.

We know we’ve asked a lot, and you’ve given more than your fair share, but if you can, please make another donation today.

We’re so very close, two of seven are safe, but we need your help to get to the finish line.

As always, thank you from the bottom of all our hearts. We could never have done any of this without your support, and thanks to you two brave refugees are safe. Hopefully, there’ll be more good news to share soon.

Ethan, Marc, Cristina and the entire For the Refugees team.